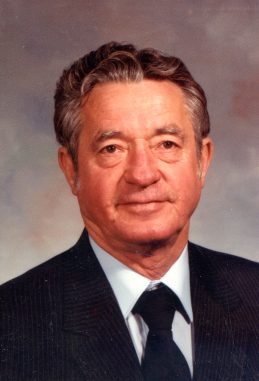 Richard “Dick” Swackhamer, 93, of Frankfort, passed away on Sunday, July 30, 2017 in his home, surrounded by his loving family.

He was born on March 16, 1924 in Clinton County to Lee Alexander and Dorcas (Reagan) Swackhamer.  He married Patricia Newhouse in 1948 and they later divorced.  He married Sandra Hauenstine on May 3, 1974 in Ft. Wayne and she preceded him in death on June 8, 2016.  He was a 1942 graduate of Jackson Township High School.  Richard served as a Corporal in the United State Marine Corps from 1943 to 1945 during World War II Pacific Theater in the Marshall Islands.  He earned his Bachelor Degree in 1948 from Canterbury College in Danville, IN and his Masters Degree from Butler University.  He taught at Fishers and was Principal at Durbin until becoming Principal of Kirklin in 1969.  He became the first Elementary Principal at Clinton Central in 1971 until his retirement in 1989.  He was a lifelong educator that loved children.  He also ran his own painting business called CC Paint Crew.  He painted with fellow teachers, students, and family for a number of years.  He was a member of the First Baptist Church.  “Swack’s” other memberships include the Frankfort American Legion Post #12, VFW Post #1110, Marine Corp League Detachment #967, and Moose Lodge #7.  He was an avid sports fan as both a participant and spectator at both the high school and collegiate levels.

Memorial donations may be made in “Swack’s” honor to the Toys for Tots Program through the Marine Corps League, Clinton County Humane Society, or First Baptist Church with envelopes available at the funeral home.

He was preceded in death by his wife:  Sandy; brothers:  Morris Swackhamer and Clyde Swackhamer; sisters:  Alma Humburg and Joan Kingery;  granddaughter:  Whitney Anderson;  and a great granddaughter:  Mackenzie Shaffer.