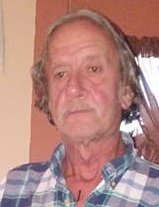 Ricky Gene Bartram, 62, of Frankfort was born September 9, 1953 in Catlettsburg, Kentucky to Harold Lee Bartram and Imogene (Hurst) Bartram.  They preceded him in death.  He earned his GED from Westfield High School on October 25, 1972.  Ricky served his country in the United States Army in the early 1970’s.

Rick Bartram was one of a kind.  He loved his Budweiser and he loved fishing at the Lagoons.  He never gave a thought about being a grandpa but when Allyson and Rorey took their first breath, he was so proud and so full of love that just kept getting stronger day by day.  He had many life stories that he loved to tell anyone who would listen.  He never met a stranger and enjoyed his life to the fullest.

Eight years ago, he ran into his best friend.  They had crossed paths for over 40 years and finally decided they would get married.  Being Rick, they go married on October 31st by a clerk dressed up as Tweedle Dee from Alice in Wonderland.  With that union, there was already a cute little white Maltese named Zeus.  They became fishing buddies.  Tazi was his next critter, she was a tiny tiger kitten.  Rick had a lot of scars from her but he would just laugh and say they were love bites.  After Zeus passed, a new little black dog named Suki decided to aggravate him.  Rick felt like Zeus had sent Suki to make him happy again.  It sure worked as Rick never loved a dog like he did Suki.

He will be missed by so many friends that he came to love in the last eight years.  We were so lucky to have had him in our lives for as long as we did.  He will always be in our hearts.  So, he can go now and join his family in Heaven and be out of pain.  He will be able to go fishing with his dad and Zeus and wait for us to join him.

No Services are planned. Archer-Weston Funeral & Cremation Center is honored to assist the Bartram family.

Ricky was preceded in death by his parents.