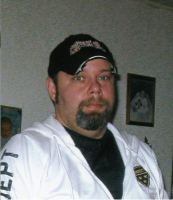 James Robert “Rob” Grice age 40 of Frankfort passed away October 11, 2010 in his residence. Born April 13, 1970 in Muncie, Indiana to Richard A. “Rick” and Christine (Howe) Grice. Rob worked as a truck driver for several years, the past four years working for Indiana Dept of Transportation (INDOT) at the Frankfort location. He enjoyed four wheeling, Ultimate Fighting Championship matches, Martial Arts, and his family and his children were the most important thing in his life. He married Jessica Tishner on January 9, 2009 in Frankfort and she survives, also surviving are his parents: Rick & Christine Grice of Frankfort, his four children: Whitney, C.J., Quentin, and Hunter Grice all of Frankfort, 2 brothers: Rick (Tammy) Grice and Ramsey Grice and (companion Misty) both of Frankfort;3 nieces, 1 nephew, and one great niece and one great nephew also survive. Preceding him in death was his grandparents, a sister-in-law: Darlene (Ward) Grice, and an uncle Terry Howe. Funeral services will be held 1 PM Thursday October 14, 2010 at Eagle Harvest Ministries 1380 N. SR 39 Frankfort, Indiana with burial following in Bunnell Cemetery. Friends may call 5-8 PM Wednesday at Archer-Weston Funeral Home. Memorials appreciated to American Heart Association.