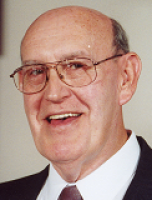 Robert E. Brewer age 74, formerly of Frankfort passed away November 5, 2010 in his home in Rockville, Indiana. Born October 2, 1936 in Mechanicsburg, IN to George and Goldie (Angleton) Brewer. He was a member of the First Baptist Church of Frankfort and a member of the Masonic Lodge. He loved bowling, the Colts and the Pacers. He was an avid fisherman, camper and horseshoe player. Mr. Brewer attended the Kokomo School System and worked for Indiana Brass. He then worked for Allison Turbine in Indianapolis where he was a supervisor. He retired in May of 1991 after 32 years. Mr. Brewer lived in Antioch, IN before moving to Rockville, IN upon his retirement. He married Barbara Stowers on July 9, 1954 in Frankfort and she passed away on February 4, 2001. Surviving are one son: Steve (Melissa) Brewer of Frankfort, 3 daughters: Robin (Jeffrey) Beumel of Lafayette, Penny (Greg) Boots of Frankfort, and Sandy (Frank) Waible of Puyallup, WA, 5 grandsons: Jeffrey Beumel II of Lafayette, Ryan Boots (girlfriend Angie Kirkpatrick) of Louisville, KY, Matthew Brewer of Kokomo, Derek (Sarah) Waible and Jared Waible both of Puyallup, WA, 3 granddaughters: Jennifer Beumel of Lafayette, Heather (Allen) Hayes, and Patricia Brewer both of Frankfort, 1 great-granddaughter: Sophia Waible of Crawfordsville, IN, a special friend: Mary Lou Harmon of Rockville, IN, 4 brothers: Leon Brewer of Calhoun, GA, Ronnie Brewer, Rex Brewer, and Eddie Huffer all of Pombay, FL, and several nieces and nephews. He was preceded in death by his wife and 4 brothers: George Brewer, Norman Brewer, Monroe Stout and Leroy Stout.;A memorial service will be held on Saturday, November 13, 2010 at 1 PM. Visitation will be prior to the service from 11 AM until time of service at Archer-Weston Funeral Home. Pastor Tom Jameson will officiate. Memorial contributions can be made to the American Cancer Society with envelopes available at the funeral home.