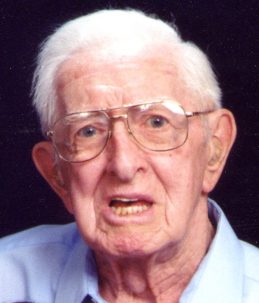 Roy A. Meek, 101, of Frankfort passed away on Wednesday, November 9, 2016 at the Mulberry Health and Retirement Community.  He was born on November 8, 1915 in Thorntown, Indiana to Albert Francis and Lyda Maye (Yount) Meek.  He attended Lebanon High School and was a truck driver for P.R. Mallory for 25 years.  He married Allegra M. Bryant on March 9, 1937 in Frankfort and she preceded him in death on September 3, 1993.  He was a member of Trinity United Methodist Church for over 70 years.  He was an avid Colts fan and loved racing.  He lived long enough to watch the 100th running of the Indy 500, see the Cubbies win the World Series, and was able to vote in this election!

In lieu of flowers, memorial donations may be made in Roy’s honor to the Cerebral Palsy Foundation with envelopes available at the service.

Along with his wife, he was preceded in death by his son:  Kenneth Andrew Meek, 5 brothers and sisters, and a nephew.

5 Condolences for “Roy A. Meek”