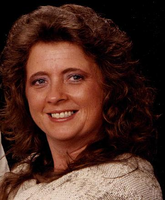 Ruby Gaye Eaton age 46 of Frankfort passed away November 29, 2008 at St. Vincent Hospital in Indianapolis. Born October 20, 1962 in Frankfort to Herbert E. & Dorotha M. (Leach) Arnold.;She previously worked at Zachary?s Confection and more recently for Walmart. She married Von Eaton on January 17, 1981 in Frankfort and he survives. Also surviving is her mother: Dorotha Arnold of Frankfort, 2 daughters: Lisa Baldwin (Jason) of Lafayette, Tosha Eaton (companion Raul Perez III) of Frankfort, a son: Brad Eaton of Frankfort and a stepson: Michael Eaton of Frankfort. a granddaughter: Hunter Baldwin and 3 step grandchildren: Marshall & Kaitlynn Reynolds, and Darren Eaton. 2 brothers: Earl Arnold (Trisha) of Frankfort and Tony Arnold (Melinda) of Dayton, 3 sisters: Lorraine Chafin (Fred) and Mandi Brody (Brandon) both of Lafayette and Joyce Reed (Robin) of Frankfort. Several nieces and nephews also survive, and she was preceded in death by her father, a brother, and a stepdaughter.;Funeral services will be held 11 AM Thursday December 4, 2008 at Archer-Weston Funeral Home burial will follow in Kilmore Cemetery. Friends may call 6-8 PM Wednesday at the funeral home. Memorials appreciated to Frankfort Shop with a Cop Program.