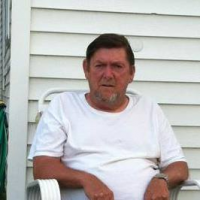 Russell D. “Hammer” Cunningham, 66, of Frankfort passed away December 2, 2013 at St. Vincent Frankfort Hospital. He was born on April 10, 1947 in Frankfort to Raymond Kenneth & Nellie E. (Kanatzer) Cunningham. He married Linda Mooney on September 29, 1972 in Frankfort and she survives.;Russell was a lifelong Clinton County resident and worked for the City of Frankfort Street Department, retiring in 2007 after 34 years of service. He was an avid Cubs and Bears fan and enjoyed being a grandfather.;Surviving along with his wife Linda are his Daughter: Angie Cunningham (Companion: Chris Banks) of Frankfort, Son: Jason (Amy) Cunningham of Frankfort, Grandchildren: Shyann and Christopher, Brothers: James (Joyce) Cunningham, Bill (Rose) Cunningham, and Jerry Cunningham of Frankfort, Sister: Patricia Anderson of Kempton, Special Niece: Jennifer Cunningham of Thorntown, and several Nieces and Nephews;He was preceded in death by his parents, 3 brothers and a sister.;Funeral Services will be held at 10:30 a.m. Friday, December 6, 2013 with visitation from 5-8 p.m. Thursday, December 5, 2013 at Archer-Weston Funeral Home. Burial will be in Bunnell Cemetery. Pastor Pam Ditson-McCall will officiate. Memorial donations may be made to the family in care of Archer-Weston Funeral Home with envelopes available at the service.