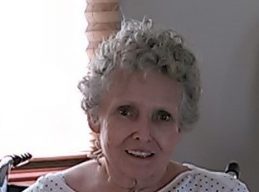 Sandra Lee Swackhamer, 79, of Frankfort, passed away on Wednesday, June 8, 2016 in her home.  She was born on September 28, 1936 in Indianapolis to Edgar Frederick and Mona L. (Rukes) Hauenstine.  She married Richard Swackhamer on May 3, 1974 in Ft. Wayne and he survives.

Sandra is a 1954 graduate of Howe High School.  She worked for Peter Paul Confections in Frankfort, Schultz Supermarket in Frankfort, American Fletcher Bank in Indianapolis, and the Indiana State Chamber of Commerce.  She was a member of First Baptist Church.  She loved spending time with her family and her “Babydog”.  She also enjoyed reading, music, canning and fishing.

Memorial donations may be made in Sandra’s honor to the Bible League International, First Baptist Church or the Clinton County Humane Society with envelopes available at the funeral home.

A funeral service will be held at 1 p.m. Monday, June 13, 2016 at First Baptist Church in Frankfort. Friends may visit from 2 to 5 p.m. on Sunday, June 12, 2016 at the Archer-Weston Funeral & Cremation Center in Frankfort. Pastor Chuck Williams will officiate. Burial will follow in Green Lawn Cemetery.

She was preceded in death by her parents, a daughter: Julie Ann Brouse and a sister: Patricia Furry.