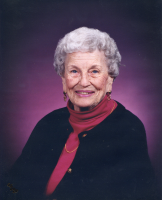 Sarah A. McAhren, 97, of Frankfort passed away December 12, 2013 at Clinton House Health and Rehabilitation Center. She was born January 3, 1916 in Barren County, Kentucky to Benton McMillan and Pernie Alice (Goode) Miller. She married William Orvin McAhren on December 27, 1942 in Pickard, Indiana and he preceded her in death on April 15, 1980.;Sarah moved to Indiana in 1941 where she later resided in the Scircleville and Hillisburg communities. She retired from Uni Electric in Frankfort. She was of the Southern Baptist Faith. She was a member of the Red Hat Society and loved playing Bingo.;Survivors include her cousins including Ruth Maxwell of South Bend and several Nieces and a Nephew.;Her niece, Martha, would like to thank the numerous people and organizations that have provided support and care for her Aunt Sarah throughout the years.;Visitation will be from 10 ?” 11 a.m. on Tuesday, December 17, 2013 at Archer-Weston Funeral Home with the funeral service immediately following at 11 a.m. Pastor Mark Mowery will officiate the service.