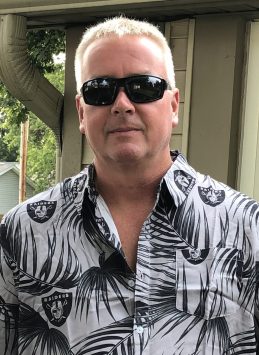 Todd Devon Castle, 49, of Frankfort passed away unexpectedly at home on November 30, 2021 at 12:20 a.m.  He was born on July 20, 1972 in Frankfort to the late Danny Devon Castle and Devonna Cunningham Castle Dieterle.  He married Angela Lynn Hunter on March 26, 2001 and she survives.

Todd was a 1991 graduate of Frankfort Senior High School and worked as a heavy equipment operator for 25 years with the Local 103.  He was currently employed with Mussche Excavating.  Todd was a member of the Local Eagles Aerie 976.  He loved sports, especially his beloved RAIDERS, and his HOTROD, a 1968 Chevelle.  He enjoyed collecting and playing vinyl records, as well as traveling with his family and playing cards with friends.  He was the life of the party – he loved LIFE, his family, his Raiders, and his friends.

Memorial donations may be made in Todd’s honor to the Clinton County Boys and Girls Club, 1100 W. Green Street, Frankfort, IN  46041.

No services are planned at this time.  A Celebration of Life will be planned at a later date. Archer-Weston Funeral & Cremation Center, 501 East Clinton Street, Frankfort is honored to assist the Castle family.

He was preceded in death by his loving fathers: Danny Castle and Jeffrey Dieterle, along with his grandparents: George and Jennie Cunningham and Jesse Castle.