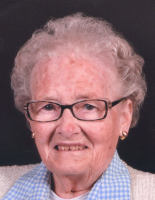 Violet E. Allen, 92, of Lebanon passed away January 1, 2014 at Witham Memorial Hospital in Lebanon. She was born April 26, 1921 in Clinton County to Fred Ray and Emily Jane (Purcifull) Douglass. She married Charles Edgar Allen on April 29, 1939 in Frankfort and he preceded her in death on September 12, 2007. Violet was a 1939 Kirklin High School graduate. She was an inspector for PR Mallory for 28 ½ years retiring in 1981. She was a member of Hope United Methodist Church in Frankfort. Survivors include: 2 Daughters: Carolyn Jean (Bill) Bell of Lafayette and Marlene Ingle of Ossian, IN; Daughter-in-law: Betty Allen of Lebanon; Brother: Keith (Jo) Douglass of Sinton, TX; 8 Grandchildren; and 14 Great-Grandchildren. She was preceded in death by her husband and a son, Howard Allen who passed on October 11, 2013. Archer-Weston Funeral Home is assisting the family with funeral services that will be held at 11 a.m. Saturday, January 4, 2014 at the Hope United Methodist Church. Friends may visit from 9 a.m. until the time of service at the church. Pastor Ed Pearson will officiate. Memorial in Violet’s memory may be made to the Hope United Methodist Church.