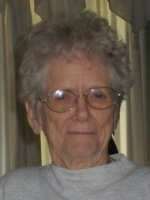 Vivian Louise Leach, 83, of Frankfort, IN passed away December 16, 2013 at her home. She was born on September 21, 1930 in Frankfort, IN to the late Everett & Ethel (Watters) Cox. She married Willard Leach on January 28, 1971 and he survives. Mrs. Leach was a 1947 graduate of Frankfort High School and a lifelong Clinton County resident. A homemaker, she also volunteered at the Salvation Army. Louise was a member of the New Life Assembly of God Church and helped with jail ministry at the Sheriff’s Department. Surviving along with her Husband, Willard Leach of Frankfort are her Daughter, Debby Howe of Chandler, AZ; Grandson, Jason (Amanda) Kallner of Virginia; Granddaughter, Terra Hurless of Frankfort; Great Grandchildren, Jade Mullinax, May’ Ce Mullinax of Frankfort and Abigail Kallner of Virginia; Great Great Grandson, Luciano Benjamin Mullinax of Frankfort. She was preceded in death by one brother. Family and friends may visit from 4-7 p.m. Friday, December 20, 2013 at Archer-Weston Funeral Home. Services will be 10 a.m. Saturday, December 21st at the funeral home. Entombment will be in Green Lawn Mausoleum. Memorial donations may be made to Clinton County Humane Society.