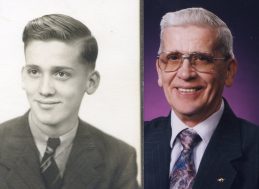 Ward B. Underwood, 92, of Kokomo, formerly of Frankfort passed away Thursday, March 23, 2017 at Waterford Place Health Campus in Kokomo.

Ward’s family would like to thank the Waterford Place Legacy Staff, Guardian Angel Hospice, and Chapter “K”ruisers Club for their loving card and kindness.

Memorial donations may be made in Ward’s honor to the Trinity United Methodist Church with envelopes available at the funeral home.

Funeral services with Masonic rites will be held at 2 p.m. Monday, April 3, 2017 at Archer-Weston Funeral & Cremation Center in Frankfort.  Friends may visit from Noon until the time of service at the funeral home.  Grant Merrell will officiate.  Burial will follow in Bunnell Cemetery.

He was preceded in death by his parents, a sister:  Lela Kathryn Underwood, a daughter:  Patricia Ann Underwood, his wife Betty of nearly 66 years and his second wife Glendora.

5 Condolences for “Ward B. Underwood”