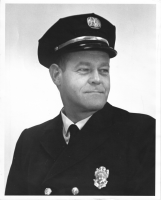 Wayne Edwin Wainscott, 86, of Frankfort, passed away Wednesday, Sept. 11, 2013 in the Wesley Manor care center after a brief illness. He was born July 1, 1927 in Frankfort, to the late Beatrice and Chester “Pony” Wainscott. He was one of four children. Upon early graduation from Frankfort Senior High School, Wayne joined the US Navy and served in the Pacific during World War II. He served in the occupation forces and assisted in the reconstruction in Nagasaki Japan. Shortly after his discharge he returned home and married his lifelong friend, Mary Jane Baird, on Christmas Eve, 1947 at the First Baptist Church in Frankfort, where he was a lifelong member. Wayne served 20 years as a firefighter with the Frankfort Fire Department, including a tour as assistant chief. He operated several businesses in Frankfort, including Wainscott TV and Appliances as well as Securetronics (purchased by Honeywell Corp). As a civic leader, Wayne served for 16 years on the Frankfort Community School Board. He was a member of the American Legion, Post 12 in Frankfort. A dedicated father, Wayne coached his children’s little league baseball teams, and supported their theatrical and tennis endeavors. He was an avid sports fan, who always enjoyed cheering on his children, grandchildren and great grandchildren. He was also a supporter of the Indianapolis Colts and Indiana Pacers. Wayne is survived by two siblings: Maxine (Charles) Kasper and Lois Freeman, both of Indianapolis; children: Denny (Carol) Wainscott of Frankfort, Teresa (Jon) Inglis of Boulder Colo., Jayne (Bob) Stommel of Indianapolis and Sam (Barb) Wainscott of El Paso, Texas; grandchildren: Nick and Andy Wainscott, Barbara Meyer, Katie and Mark Koselke, Mathew, Michael and Max Wainscott, Jon and Clifton Stommel, Amanda Massey and Nathaniel Wainscott; and 11great-grandchildren: Madeline Meyer, Taren, Edwin, Zachery, Wesley, Drew Wainscott, Sam, Jake, Xander, Izzy Massey, and Kylie Norman. With his passing, Wayne is reunited with his wife: Mary Jane Wainscott; a sister: Beverly (Mike) Michaels; and son: Edwin Wainscott (Kathy). Visitation will be 4-8 p.m. Monday, Sept. 16 at Archer-Weston Funeral Home. Services will be 10:30 a.m. Tuesday, Sept. 17at the funeral home, with Pastor Chuck Williams officiating. officiate. Burial will be in Bunnell Cemetery. In lieu of flowers, please make memorial donations to the “Ed Wainscott Memorial Fund: for Frankfort Cross Country and/or Track and Field scholarship, c/o The Farmers Bank, 9 East Clinton Street, Frankfort, Indiana 46041 or the First Baptist Church Food Pantry. Envelopes will be available at the funeral home.